“She’s probably closer than most of us to what future human beings will be like.” – GQ Magazine

“She’s at the center of a new hip-hop generation that pairs reckless creativity with online mythmaking and ignores the old rules about who you should be, what you should wear, and what you can become.” – SF Weekly

“Kreayshawn is a trendsetter in music, fashion, and the Internet and isn’t going anywhere but up.” – CBS News

“Kreayshawn has become a global obsession; she’s anything but boring.” – V Magazine 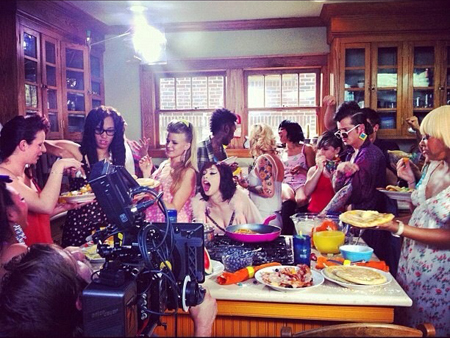 Following a year full of shows, travel, press, photo shoots, and personal projects, Kreayshawn, one of 2012’s most talked about sensations, will release her debut album, Somethin ‘Bout Kreay on August 14, 2012 via Columbia Records. Drawing inspiration from a myriad, of genres including everything from sissy bounce to juke to 80’s rap, to pop and beyond, Kreayshawn’s album is a reflection of her vast musical taste.

This past year has been a flurry of excitement and new experiences for the 22 year-old Oakland, California native, who abruptly gained the attention of millions when her undeniably catchy anti-materialism anthem “Gucci Gucci,” became an instant viral hit. “Gucci Gucci” garnened over 200,000 views within its first 48 hours last May and over 2 million views in just two weeks, with over 34 million views to date. Kreayshawn worked on her debut album in between performances around the world in Japan, the UK, France, and Canada and US major festivals like Voodoo, POPPED!, Bamboozle & The VICE Noisey tour, which she co-headlined with Neon Indian. Says Kreayshawn, “I feel so accomplished, having finished my album; I got to travel the world, perform for crowds of tens of thousands, be on covers of magazines all over the world, and finish a whole album in less than a year.”

Setting the tone for Kreayshawn’s debut album is the single “Breakfast,”, produced by Free School. The video, which she directed and produced in Atlanta, features 2 Chainz. “My favorite part about the video shoot was the breakfast party in the kitchen. It was so colorful and just how I envisioned it when I wrote the treatment.” With the album release date now on the horizon, Kreayshawn’s excited to share her eclectic style with the public. Says Kreayshawn, “I just want everyone to be ready for a mystical musical journey through genre and sound. There’s just somethin ’bout Kreay…”

Watch the video for “Breakfast” here