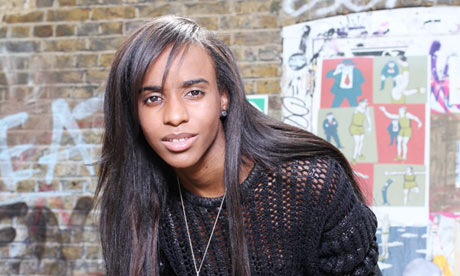 The critically-acclaimed 21-year-old Brooklyn-based rapper/singer, Angel Haze, excitedly broke the news via her Twitter account that she officially signed to Republic Records. The news immediately sent shockwaves throughout the music community. Born in Detroit and residing in New York, she’s witty, raw, and unapologetic. Angel Haze began penning songs at the age of 11, and has morphed into a formidable rapper/singer in the process. Upon the release of her critically-acclaimed EP, Reservation, Angel Haze became an underground favorite. With dark verses, gruff delivery, melodic choruses and incomparable energy, the hip-hop community immediately embraced her sound. The stand out track from the LP, “New York,” is currently receiving radio airplay on one of the nation’s premiere hip-hop/R&B stations, Hot 97- and the record’s slasher flick-inspired video recently premiered online to much acclaim.

The Source applauded her message and music, proclaiming, “What this up-and-coming female MC says will make you listen”, and Stereogum called “New York”, “a great platform for Haze’s cool focus”. She’s also been prominently covered in the likes of XXL, Pitchfork, Earmilk, The Fader, and more. As soon as she posted word of the signing on her Twitter, tastemakers such as Vibe, Complex, HipHopDX, and countless others ran with stories, heightening the fervor around this exciting new artist. Angel Haze’s major label debut will be released under her manager Le’Roy Benros’ Noizy Cricket!! imprint via Universal Republic.