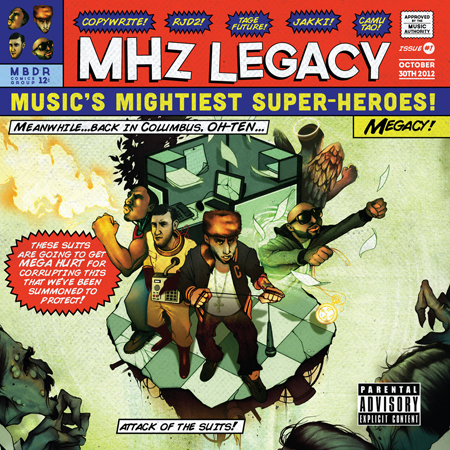 On October 30th, MHz Legacy will release their new, self-titled album via Man Bites Dog Records. The album will be the first cohesive offering from MHz Legacy in over a decade – but it’s not because the crew hasn’t been busy. Quite the contrary: RJD2 has become one of music’s most rangy and talented producers; Copywrite, who spent the aughts being courted by Roc-A-Fella Records, remains, along with Jakki Da Motamouth and Tage Future, among rap’s most talented lyricists; and Camu Tao, before his untimely passing in 2008 following a bout with lung cancer, was a flagship artist on the now-defunct Def Jux label, forming the duo Central Services with El-P, and serving, with his unique style and delivery, as an influence to many. Two of those people that call Camu influences are Danny Brown and Harry Fraud, both of whom appear on this latest single from MHz Legacy, “Spaceship”.

From its inception, “Spaceship,” premiered today by FADER, served as homage to Camu, who appears throughout MHz Legacy with a number of never-before-heard verses. The song’s catchy, topsy-turvy chorus (“You don’t know how to drive a spaceship/ You don’t know how to fly a car”) pulls from a Camu vocal, and his off-kilter delivery – he’s also responsible for the first verse on “Spaceship” – is just as powerful today as it was over 10 years ago. And most excitingly, Camu’s verse sounds right at home next to Danny Brown, who’s own pitchy, unorthodox delivery makes for the perfect Odd Couple pairing.

Fader premiered the single, and more info can be found here

For over a decade, the Columbus, Ohio, artists that originally formed to make up MHz, rappers Copywrite, Camu Tao, Tage Future, and Jakki Da Motamouth, along with producer RJD2, have been some of the most influential and revered in the underground scene. But despite their impressive and varied solo careers, to date, the super crew has only released one album, 2001’s Table Scraps, largely a collection of loosies and rare b-sides. MHz suffered a major setback in 2008 when Camu Tao, one of the most quietly influential rappers in the 00s, passed away after a two year battle with lung cancer. In his memory, MHz came back together to re-release Table Scraps via then upstart hip-hop label Man Bites Dog Records. Since then, MHz has been working on an official group debut and now, having changed their name to MHz Legacy in honor of Camu Tao, the group is prepping the release of their self-titled album. The album, being released October 30th via Man Bites Dog Records, includes features from Danny Brown, Blu, Slug (of Atmosphere), ILL BILL, Slaine, and Oh No, and joining in-house producer RJD2 behind the boards will be Harry Fraud, Marco Polo, Stu Bangas, Illmind, and others. In memory of Camu Tao, the album will also feature a number of never-before-heard Camu Tao verses from the vaults.

Passionate about music and with an ear for discovering great talent, RML formed Man Bites Dog Records in 2005 in Northern Virginia, a few short miles from Washington DC. In an area dominated by GoGo Music, it was the goal of MBDR to offer an avenue for local hip-hop talent. The label quickly grew beyond the confines of the local scene, however, as MBDR began to release project from the likes of Copywrite, Vast Aire, and others. Since then, it has been MBDR’s goal to sign artists who create classic music – music that stands the test of time – in genres ranging from underground New York hip-hop to funky pop. Currently, MBDR’s roster includes Killah Priest, Copywrite, Vast Aire, MHz Legacy, Jakki da Motamouth, Stu Bangas & Vanderslice, Esoteric, Wais P, Bronze Nazareth, Crimison Gods, Kount Fif, Empuls, Last Bison, Jason Rose, Brink, Red Mud, Sinista Daniro, Dom, Jay Notes, and The Swashbuckler.