She goes by the name Kreayshawn, however her real name is Natassia Gail Zolot, she is known for her first hit “Gucci-Gucci.” This hit was immediately an internet success and lead to the debut of her new album, “Somethin’ Bout Kreay”. This album is past the verge of leaving hip hop and bordering into rap city. Natassia seems to be channeling her inner Nicki Minaj, but for her, this may not necessarily be a good thing.

This latest album features artists such as Chippy Nonstop, V-Nasty, Kid Cudi, Diplo, Sissy Nobby and 2 Chainz. The best song of Kreayshawn’s newly released album, BFF, a song that is based around, none other than her best friend forever. She sings, “We can just hang out and do whatever…” the lyrics then go off into profound explicity, that even includes “smoking doobies” as a hobby of these bff’s. The album features her biggest hit yet, “Gucci Gucci” which is digressing the major fashion labels such as Gucci, Louis Vuitton, Fendi and even Prada, because she is  “swagging” better than the other “basic-a** ho**.

Her songs with features by other rap artists are one in the same, except the guests can actually hold a beat and find their rhythm. Her collaboration with Kid Cudi was an impressive point of her album, Cudi was, by far, pulling the weight of the song as Kreayshawn repeats “like it or you love it.” Her lyrics did not impress mostly due to her repetition and lack of a smooth rhythm when she tried to rap.

Don’t get me wrong, she obviously has talent, she has put out an album and had a few hits, and if you like artists like Kid Cudi and 2 Chainz you may just like her. But her work as a whole was just okay, the album all blended into one boring and offensive chain of songs. Behind her voice the instruments were loud and abrupt, it could, however, be very good to use in a dj-ing mix for a nightclub. Kreayshawn may be on her way to stardom as a rap artist, but it’s just that – she is on her way and not quite there yet. 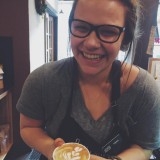 Well, hello there! Let's see...Lil'ole me is just an average girl in the midst of
7, 068,675,958 people, approximately, of course. I believe one person can change something they put their mind to, and I'm sure gonna try.