Coming live from North Carolina is rapper ethemadassassin. Although he has been active since the ‘80s, E has spent a majority of the time in the underground circuit. He offers Soul on Fire as his 3rd solo album and as another step in his long career. His experience shows in his raps as he speaks on his rocky past and lessons learned from his successes and failures. He has been with music and the streets for a long time and his maturity comes across loud and clear.

Ethemadassassin is an artist with a mature voice and has plenty of tracks to look out for on this album. ‘What it’s Supposed to be’ is my favorite track on this album as it has some of the best lyrics of madassassin married with a great hook and even better beat from Japanese producer Kyo Itachi. It serves as the best example of the eye for grade A sound that E actively tries to put forth.

‘80s and 90s’ is creative as E runs down all of the popular styles and culture that he witnessed and grew up on. ‘Fight Music’ has an excellent beat built off an energetic guitar riff.  E uses this tune effectively to deliver an aggressive song about keeping it real in life. ‘Can’t Get Enough’ contains a wonderful and soulful instrumental that could stand alone without any vocals.

The biggest negative in my eyes is the length of the songs themselves. E clearly has plenty of bars to fire off and it would have been cool to hear more tracks that focused on rhymes uninterrupted by hooks. The choruses are not bad by any means but a rapper with skills like madassassin should allow his verses take center stage more often.

Soul on Fire is an exercise in skillful lyricism and top-notch delivery from someone who has valued experience with hip-hop. Ethemadassassin creates quality sound using the past of the genre and his own life for influence.  The album drops Sept 17th. 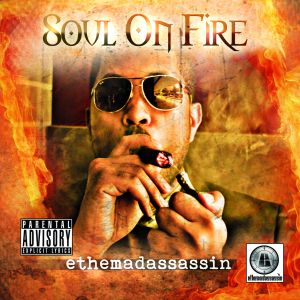 Leland Gill is an aspiring writer and doctor who lives life one day at a time and tries to see the deeper meaning in everything. His love for hip - hop is only matched by his love for comics and exercise.

One reply on “ethemadassasin – Soul on Fire album review”