On his sixth studio album, the Chi-town native gets back on track after a certain Electric Circus misstep. Kicking off with an upbeat intro of the same name, Be resurrects the witty wordsmith that hip-hop heads longed for since 2000â€™s Like Water For Chocolate. Rather than being pigeon-holed as â€œthat conscious rapper from the â€˜90s,â€ however, Common takes the essence of his past and brings it to the present. Friends and G.O.O.D. label-mates Kanye West â€“â€“ who produced all but two tracks â€“â€“ and John Legend create a jazzy, soulful backdrop on which Common paints a rich, earth-toned picture of love, life, hardships and hope.

It is safe to say that every artist has an album they’re not very proud of. They actually wish they never made that album and neither do the fans or the media. Common never was much into the limelight until his relationship with Erykah Badu and then his ‘breakout’ hit caught the attention of the media with ‘The Light’. Common was now destined to become the next big thing, but then came Electric Circus. It was an album criticized by the fans and the media and it was the album that just about everyone wished he never made. Although it was innovative and something new to hip hop, it was simply hated on. This made Common want to go full circle and come back to his roots.

These lines, lifted from Commonâ€™s sixth studio album, Be, remind us about the danger of nostalgia. Ever since fans lauded Commonâ€™s second album, Resurrection, a classic, they have expected him to revert to his old self. Where is the Common Sense with the nimble tongue, double metaphors, and puns? Where is the emcee â€œwhose rhymes be kickin like a brotherâ€™s breath be stinkinâ€? Well, on his sixth album, he reminds folks heâ€™s still here, still hungry, but he refuses to rest in his past. He chooses instead to just be.

As the line-ups died down outside the venue, DJ Kemo of The Rascalz kept the crowd entertained before the show began. Vancouver’s Jaykin and Usual Suspecs came out, performing some familiar songs to their local crowd before leaving the stage for information to be presented on upcoming shows. As the MC spoke of what Vancouver had to look foward to in upcoming months he was interupted by chants for Common. Kemo even received boo’s when the crowd were informed his sets would be continuing, not out of criticism, but because the overly excited audience were getting restless in anticipation of the chi-town emcee. 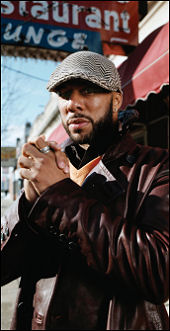 The now more infamous than ever Source magazine broke Lonnie Rashid Lynn, otherwise known as Common (formerly Common Sense) in the early 1990’s through featuring him in their Unsigned Hype column. Relativity soon after took him on a whirlwind ride that would later end up having him known for formerly loving “H.E.R.” before transporting him over to MCA.

But through several albums, Common, though extremely respected didn’t receive the sales success he deserved.

In 2004, rumours spread and then were confirmed that Common was working with his old friend and 2004 “It” rapper, Kanye West. It wasn’t until 2005, however, when Common put out “Be” that his hard work finally paid off.

Still reaping the rewards earned by his largest album sales to date, Common continues to tour and is now expanding his creative endeavours to the clothing and children’s literature markets. 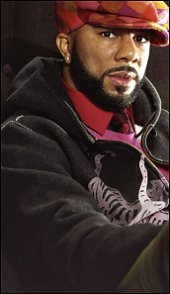 Common is anything but a common emcee. First known as Common Sense (but had to drop the “Sense” due to legal problems), Common gained enormous critical acclaim with the love song to hip-hop titled “I Used To Love H.E.R.” where he uses falling in love with a woman as a metaphor for his relationship with hip-hop. After releasing many albums, (each one sounding different from the next), Common matured into an eclectic artist who takes chances and makes soulful hip-hop music that is extremely different from the mainstream.

Few artists have been as revered or praised as the rapper formerly known as Common Sense. For the past thirteen plus years, the Chi-town emcee has entertained and presented bouts of introspection, which seem to be unforgettable. From “I Used To Love H.E.R.” through “Retrospect For Life” and “Sixth Sense,” fans and peers alike have kept Common’s praises sung loud.

It seems though, that talented artists don’t always get the commercial success and acclaim that they deserve. Yes, Common has gained respect around the globe, but in 2005, with the help of friend and fellow Chicago native Kanye West, Common seems set to see success beyond his experiences.

A wealth of classic descriptions with regards to his forthcoming album “BE” have helped hype up the release (which drops in May) considerably. Common even has his single “The Corners” on BET’s 106th and Park, something an introspective artist doesn’t often manage.