I’m going to say this right off the bat: Bad Meets Evil’s album Hell: the Sequel is probably not going to sway you one way or another about Eminem. I was truly hoping for a mind-changer, as I call it – a song, an experience, a revelation that can completely transform your opinion of an artist – but alas, I was not rewarded.

Let me backtrack a bit by saying that, lyrically, there’s nothing wrong with Eminem or Royce Da 5’9”, Eminem’s other half in Bad Meets Evil. Hell: The Sequel is a compilation of supremely timed verse-spitting, with Eminem and Royce trading bars with effortless ease and throwing down fiery lyrics that are so well enunciated they could act as the beat itself (see: “Fast Lane”). In fact, sometimes I wish they did.

Which brings me to my next point. I’ve never been a huge fan of the melodic part of Eminem’s songs. When I think of Eminem, my mind is whisked back to eighth grade; I’m just coming into my rap maturity and the pubescent boys in my class are torturing me at recess, backing themselves up toward me and boorishly repeating, “my bum is on your lips, my bum is on your lips.” Shudder. Ok, so I have deep-seeded personal issues with this particular song, but the annoyance factor found on the track “The Real Slim Shady” off the album The Marshall Mathers LP – both lyrically and musically – continues throughout Eminem’s career. And it doesn’t stop with Hell: The Sequel.

While Hell: The Sequel stands out on a few levels –lines upon lines of piercing lyricism, well-timed verses – the rest of it falls flat. In general, Hell: The Sequel doesn’t stray too far from what Eminem’s done in the past. He’s still spouting homophobic slurs, he’s still claiming he’ll stomp on lesser rap fools, and he’s still the good old playboy we all know, as evidenced by the lyric “if you ain’t suckin’ a dick, why you sittin’ there?” in the track “A Kiss.” Sound familiar?

The real turning point for me, though, happened when I heard the track “Lighters”. This song can only be characterized one way: disaster. Maybe I’m unfairly biased against Bruno Mars, and I’m probably in the minority; that’s fine, I can live with that. But this track proves to me what I just didn’t want to be true — Hell: The Sequel was made for radio play, plain and simple. “Lighters’” sweet-sounding melody combined with Mars’s sensual boy band-reminiscent voice will no doubt incite gaggles of 14-year-old girls to exclaim praise on their Facebooks. It’s a con, it’s dirty, and it has nothing to do with the rest of the album. Hell: The Sequel is simply not for 14-year-old girls.

Lesser-known but no less talented Royce Da 5’9” (or Nickel Nine as he’s also known) is a formidable force on Hell: The Sequel as he proves he can throw down intoxicating wordplay right on par with Eminem. While, yes, he’s one half of Bad Meets Evil, I still can’t blame him for the lackluster beats because, in my mind, that’s Eminem’s domain. That’s how he’s been doing it since the album “Infinite” in 1996, and that’s how he does it now. Royce’s album “Street Hop” (2009) can prove my point that what’s lacking on Hell: The Sequel is simply not his fault.

Listen to Hell: The Sequel. I promise mind-blowing rhyming skills. I promise laugh-out-loud entertainment. I don’t promise something you’ve never heard before. 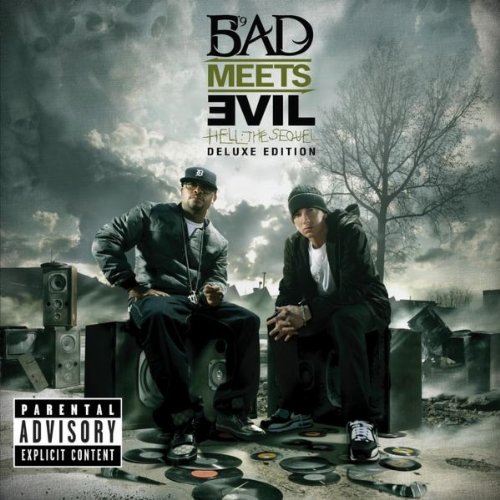