The following dates are TBD at the moment:

It’s common knowledge that BONE THUGS-N-HARMONY took a leap of faith in order make it in the music game. Boarding a bus bound for Los Angeles, they had a plan to get an audience with Eazy-E and get signed to Ruthless Records. Though things didn’t go exactly as planned, they eventually made it happen. The rest is, as they say, history, with Bone Thugs becoming the luminaries of hip-hop they are today. But what if they never boarded that Greyhound? What if life spiraled in a different direction and interfered? What if that bus left without them and they never got out of Cleveland?

I TRIED – THE MOVIE is the thrilling, action-packed tale of what could have happened if Krayzie, Layzie, and Wish never made it on their life-changing journey to Los Angeles.

Starring Krazie Bone, Layzie Bone and Wish Bone as themselves, the three remaining members of the legendary, multi-platinum selling, Grammy Award winning rap group Bone Thugs-n-Harmony, as well as a cameo from platinum selling super producer Swizz Beats, “I Tried” is the electrifying tale of what could have been; a twisted, eye-opening anecdote of chance, fate and fortune, and the harsh reality that lies beneath it all.

In 1993, before Hip Hop communities here and abound had been exposed to the unique, rousing sound that is Bone Thugs-n-Harmony, Krazie, Layzie and Wish were three visionaries trying to fulfill their lifelong dream to deliver that sound to the masses. With a bus ticket and that dream, the group boarded a Greyhound to Los Angeles, in hopes of securing a record deal on now deceased rap legend Easy E’s Ruthless Records. Focused intently on attaining the future they knew they deserved, they scoured the city in search of the one man with the power to turn their dream into a reality. Although they experienced some devastating obstacles along the way, the day finally came when they made the seemingly impossible possible, eventually achieving monumental success; winning Grammys, American Music Awards and MTV Video Music Awards and selling 35 million albums worldwide, and haven’t turned back since.

“I Tried” is a chilling tale of “what if” – the harrowing chain of events that could have possibly happened to the group had they simply never boarded that bus; the hardships they would have continued to encounter and the fame they would have never achieved. Their story’s been told, but “I Tried” exposes the part that even the most devoted Bone Thugs fan has yet to discover, until now.

Additionally, the film will be the launch of CodeBlack’s new music model. The film comes off the heels of CodeBlack’s announcement that they’ve created a new way for record companies and their artists to leverage promotional budgets to create an opportunity to recover marketing dollars that they would have normally never seen a return on. As opposed to record labels simply spending their promotional budget on the production of a music video, they’ve begun to instead invest that money into CodeBlack, which, for the same cost of the music video, can deliver both the video itself and an entire full-length narrative movie starring the artists. Codeblack and its label partner then release the movie on DVD, creating an additional revenue stream for the record company and the artists themselves.

“Through this innovative partnership with Codeblack Entertainment, we are granting our artists the opportunity to cross over to a new medium while simultaneously creating a valuable promotional tool and multi-platform exposure for all parties involved.” said Shawn Holiday, Sr. VP A&R for Interscope/Geffen Records. “We are thrilled to be working with Codeblack and believe that this model will revolutionize the future landscape of music and music videos.”

Comparable to the smash hit single of the same name, “I Tried” packs a platinum punch, and will be released in conjunction with the re-release of Bone Thugs’ smash album Strength & Loyalty.

The DVD will be available nationally at leading music merchants including Best Buy, Circuit City, FYE as well as major retailers such as Wal-Mart, Target, and Blockbuster.

As one fifth of Bone Thugs~N~Harmony, Bizzy Bone has always been the dark, mysterious member. Bizzy was only a teenager when Bone dropped the classic “Creepin On Ah Come Up” in 1994. Over the years Bizzy had to endue many hardships and growing pains. His numerous disappearances from Bone videos and performances cause many to believe the group was on the verge of self-destruction. For the next couple of years, Bone was plagued with break up rumors and consistent fighting between members. However, Bizzy stuck it out and continued to make music and released his solo album “Heaven’z Movie” in 1998. The album was meet wit mixed responses, but Bizzy proved he could stand his own and didn’t need his fellow Bone members to lean on. 3 years later Bizzy Bone is back with his sophomore effort “The Gift”.

It is hard to believe that Bone Thugs~N~Harmony have been in the game for over ten years. In 1994 their classic EP Creepin On Ah Come Up made huge waves across the nation, while their follow up, E.1999 Eternal cemented them as Hip Hop heavyweights. Since then, Bone has gone through their fair share of trials and tribulations. From rampant break up rumors, to shady dealings by Ruthless Records, the Bone family has seen it all. Now off Ruthless and looking for a new home (probably with Swizz Beatz’ Full Surface Records), Bone is looking to regain their once dominant swagger. Their latest release is a side project by Bizzy and Layzie Bone entitled Bone Brothers. But unfortunately, fans will have to wait a little longer if they intended to hear that vintage Bone sound they have been waiting for.

Being Bone Thugs~N~Harmony’s most versatile and well-rounded member, Krazie Bone has gained a successful reputation for himself over the years. His rapid fire flow, smooth, yet gritty voice, and charisma on the mic has made him stand apart from his fellow Bone members. After the success of his debut album “Thug Mentality”, Bone fans have eagerly awaited Krazie’s sophomore effort “Thug On Da Line”. Unfortunately, “Thug On Da Line” doesn’t offer the performance Bone fans expected and is disappointing to say the least.

The members of Bone Thugs N Harmony have been busy this year, working hard at re-establishing the star power they once held. That task has not been easy, due greatly in part to their recent resizing to three. Nevertheless, they are moving forward along that bumpy road with great confidence that they can fully redeem themselves.

I’ve been into Bone Thugs since ‘Creepin’ On Ah Come Up,’ I peeped their first release ‘Faces Of Death’ after hearing ‘Creepin’ On Ah Come Up’ and enjoyed it a lot. ‘E. 1999 Eternal’ was a pretty dope LP, but they made a very bad decision with their next LP; ‘Art Of War,’ the bad decision was releasing it. So many tracks were of a mediocre quality, but I didn’t pay much attention to them having ‘Thug Luv’ on repeat constantly.

Bone Thugs N Harmony is one of those groups that you either love or hate. Their rapid fire flow and harmonized blends of vocals helped transport them to the top during the mid to late 90’s and help draw a fanatical backing that still to this day have supported the group. For others though, the same things that made them a success is the same reasons why many hate Bone. As they always say, if you can make it in New York you can make it anywhere. Thus the problem with Bone Thugs career. Their ability to really never break through to the East Coast hurt their longevity in the game. While “Tha Crossroads” was a huge hit, beyond that New York City really never gave Bone the props they deserved. 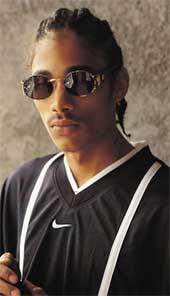 Having blown to super-stardom through the group Bone Thugs N’ Harmony, Bizzy Bone has seen it all, experiencing the limelight at a young age. For over the past decade, Bizzy has collaborated with some of rap’s finest, including the late revered emcees Eazy-E, 2Pac and Biggie Smalls.

Through troubles with Bizzy and Bone Thugs, Bizzy has pursued solo ventures, keeping his name alive. A re-united album from the group was expected this year, but as Bizzy revealed in this interview, that won’t be the case.