The prolific New Orleans rapper and former 504 Boy makes no secret of his passion for money. Between his nom de plume and his 79 minute-long album, The Stoned Immaculate, Curren$y informs active listeners about the depth and nuance of his pursuit of wealth, set to a variety of beats by a slew of quality producers (Pharrell, Daz Dillinger, J.U.S.T.I.C.E. League, Monsta Beatz et al.)

The first track and lead single, “What It Look Like (feat. Wale)”, is one of the strongest. The album starts with a rippling harp, ostensibly sampled from the 1970’s style game show Curtis Mayfield is currently hosting in Music Heaven. Beat and orchestration kicks in for good as Curren$y proceeds to answer any and all questions you may have had about the Jet Life. The same sentiment applies to the record’s second single, “Jet Life (feat. Big K.R.I.T. and Wiz Khalifa)”. No surprises here.

On the heavy third track, “Armoire (feat. Young Roddy & Trademark)”, a bizarrely enchanting chord progression blares over a tilted rhythm’s pound and scatter, showcasing Curren$y’s slow flow perfectly. In the hook Curren$y says, “’cuz this rap shit’s just my hustle baby, we paper chasin”, a premise upon which the entire album rests. The phrase “paper chasin’” and its variants appear on several songs, serving perhaps as a point of emphasis that Curren$y wants the money. He wants to live in a jet. “I like nice shit and I know how to get it,” he boasts on “Showroom”. The Stoned Immaculate in the veritable nutshell.

The result is a collection of pleasantly constructed grooves, chill-outs, Wiz Khalifa guest spots and an auto-tuned Pharrell. Good things for sure. There is nothing wrong with wanting “Fast Cars and Faster Women” and the many other things a talented 31 year-old rapper and his friends can dream of acquiring soon. If Curren$y can make more solid records like The Stoned Immaculate, he will probably be able to satisfy many of his expensive curiosities. 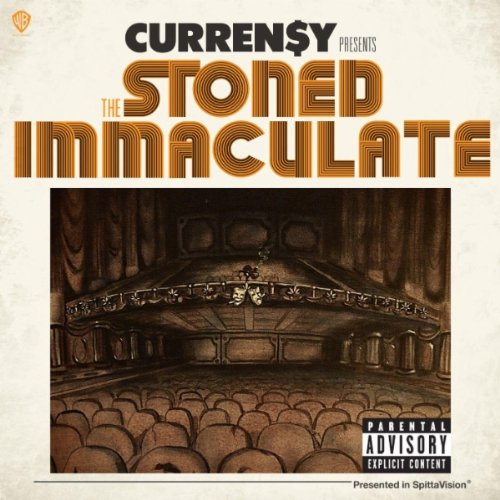