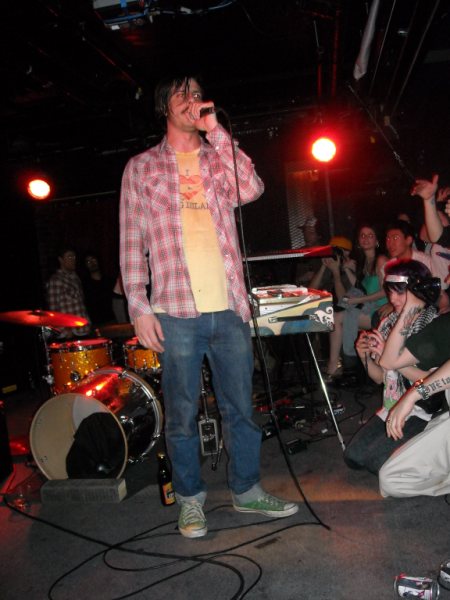 Eyedea: Haha yeah. Actually the first time it was in the newspaper they spelt it Lydia, like the girl’s name.

MVRemix: Your name used to be the sixth sense?

Eyedea: That was a long time ago. We had one thing come out under that name and it was literally when we were fifteen. At the time all the rhymester stuff was like that, like Beyond and Black Hole, etc.

MVRemix: Do you have any preshow traditions?

Eyedea: No not really. I try to warm myself up a little bit. Warm up my voice. Drink. I do like to have a little bit of time alone to focus and have time to think. Also if I’ve played the venue before I like to visualize the stage so it is not a whole new thing. Visualize it going well and then the show is not as wild and searchy especially when I’m improvising. I imagine what it’s going to be like to improvise which makes the performance not new and scary.

MVRemix: Do you have a certain vibe you want for your concerts?

Eyedea: No, not necessarily. I do want it to be a real experience for people. I don’t want it to feel super reheased — which it never will be because it never is. I don’t want it to feel like a mask of art but rather like people doing stuff with other people — totally relatable. I think artists hide behind their art. Projecting. They make art about the ideal self and not the real self which is usually contrived. It is more how they want to see themselves, which is easy to see through and then you see people’s insecurities. I’d rather have the song be about the insecurity. It’s difficult to be a human but it’s okay too. I’m not a brain surgeon, separate from the world but just a person who has ideas about stuff.

MVRemix: Your lyrics are very deep, what inspires you? You mention suffering on your myspace..

Eyedea: Yeah well, suffering that is where it all comes from. The psychological human condition. I’m rarely inspired to make music by listening to other music. Inspiration always comes from some internal conflict or some problem I see with something. Not an attempt to solve the problem which is creating a mask but trying not to run from the problem. But to confront it and to live with it. Fully admit to yourself, you’re angry, you’re fucked up, you’re sad…you are all of these things. Your ego tricks you into an identity driven tunnel and I want my art to rip that apart. It sucks to feel jealous but it is a real feeling and how do you get beyond that if you don’t understand it and your own feelings.

Anytime you have a psychological disturbance you run from it. It happens again and again, and you are never free from it. I ask, how do you free yourself from the things that are imprisoning you. You can’t run yourself out of the prison, you just end up in a new prison. That’s why, as human beings we still kill each other, that is why have war. Political differences are just superficial changes. Real change is psychological change, something we can barely do and we haven’t done collectively because we run from it. We say, “instead of being pissed off or sad I’m not going to feel that way. I’m going to do yoga or study quantum mechanics and figure out the universe.” And all this is fine but confronting and fully admitting and dealing with the psychological suffering of humanity is what I want to do. It’s kind of a Buddhist idea but we all are feeling the same pain every single human being feels that.

MVRemix: Is this what you attempt to deal with this in your songs?

Eyedea: Yeah totally. I don’t think it’s worth making anything else. When you have time to sit down what else are you going to write about. It’s the biggest thing that is happening…the state of humanity…what’s bigger than that?

MVRemix: Started out free-styling, do you incorporate it into shows?

Eyedea: Totally. Even how I live my life as an artist is based off of improvising. Starting a new band. Not rehearsing ever. I’m better off as a person if I admit that I am flawed and this is what improvising really shows. Most people are scared to sound or look a certain way and so don’t improvise. I say, Improvise! Cut your hair! It doesn’t really matter because what is behind all that is the thing that’s true, the confusion, the pain, the real thing.

A less known fact about me is that I also have a bunch of different bands. One is a fully exclusive freestyle free jazz band. We are 100% improvised music and are called Face Candy. A new thing I’m just starting is called Puppy dogs and Ice-cream.

MVRemix: You have some different pseudonyms.

Eyedea: Oliver Hart is my most famous one. I didn’t want to be feeding too much into one name.

MVRemix: Is all this improvisation why Eyedea and Abilites took a five year break?

Eyedea: Yeah I just started other bands and started doing other stuff. I needed to focus more on writing music with other instruments to make it palpable to others. A lot of work had to go into it and initially people were giving me death threats and throwing golf balls at me because they did not like the change. I had to try very hard to change people’s perspectives. I started making music when I was very young and so some people love music from the 15-yr-old, now I am 28 years old, so I am not making the same music.

Eyedea: I love music. Kimya Dawson is one of my favourites. I was sitting in a coffee house and she was playing and I was totally hypnotized. It felt like getting punched in the stomach and I realized that I had always been lying. She’s telling the truth and I had this big realization. She is so brutally true and honest and hearing her sparked this whole different development in my thought process. I listen to music all day every day.

Eyedea: Ben Folds. Ben Folds live. I think he is brilliant. Nothing super pop or anything.

Eyedea: I suppose it is a bit of a rush. It is a time and place where you can forget yourself. So much stuff is going on when you are trying to give it your all. So it is partly physical and you kind of stop and for moments you forget about yourself. I am embracing this bigger thing, which is the biggest rush, for a split second you are not dealing with you own specific identity process.

MVRemix: What is the dynamic like between you and Abilities?

Eyedea: We’ve been friends since we were kids so kind of brotherly. We are both from Minnesota, same town.

Eyedea: It’s great. It’s got a great music scene in the Twin cities. I’ve been all around the world and it’s the best I’ve seen. It’s the only reason I’m there. I can’t deal with the winter, I can’t deal with the summer, it’s terrible to live there, physically. But the music: free jazz, rock, rap, anything you want in abundance, any night of the week.

MVRemix: Do you have any musical goals?

Eyedea: I do have goals. I want to get closer and closer to not having to think about making stuff I like. My goal is to essentially not have that step. Just pick up and play. I don’t think it will ever be possible and if I did achieve it I would probably be like fuck it and go sit around.

MVRemix: Do you play other instruments?

Eyedea: I do. Guitar, keyboard. I also mix and engineer, like for our records. I do a lot of the studio recording.

MVRemix: What do you do outside of making music?

Eyedea: Not much. Clean my apartment. Do a lot of writing words. Art projects with friends.

MVRemix: How long does it take you to write a new song?

Eyedea: If it’s right the not long. I don’t sit down and try and write music. I only do it if I feel like I really have to. So if it takes more than 5 minutes I don’t normally keep it or remember it.

MVRemix: Is this why you are good at freestyling?

Eyedea: Haha, thank. I don’t know if I’m good but I’m not afraid of it. I like it and I think why I keep indulging in it is because it’s how I live my life. I improvise my life.

MVRemix: Off topic. Do you have any tattoos?

Eyedea: No. I have lot about. I’ve always thought the best thing to do would be to get one that reminds me of something. But then if I need a symbol to remind me of it then I’m not really going to be reminded. And I’m not really into putting art on my body so I’ll probably never get a tattoo.

MVRemix: How has your music evolved?

Eyedea: I started dabbling in music when I was probably around 7 and started writing words around 8. When I was a kid I was so infatuated with becoming a rockstar. I used to have all the posters, the whole thing. First time I performed I made a bunch of guitars that didn’t work and did a Poison cover. I moved from hard metal to hair metal to rap in the late 80s. Rap is kind of what got me into writing words. I thought these guys are so scary, they are so dangerous.

MVRemix: Do you have any crazy fan stories?

Eyedea: Yeah, but all of it was too intense for me. People going over the line, people really hating me and some people totally obsessed. It’s always been intense and hard for me to deal with.

MVRemix: What are some of your fears?

Eyedea: I have a lot of fears. My biggest maybe is feeling insignificant; it all boils down to that in the end.

MVRemix: Any final thing that you would like your fans to know?

Eyedea: My favourite band for the last couple years is a band called WHY?