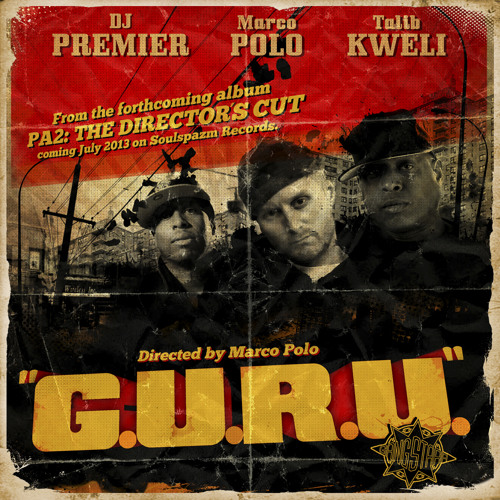 Friday April 19th marks the three-year anniversary of the passing of Guru and this track, “G.U.R.U.” f/ Talib Kweli & DJ Premier is dedicated to his memory and a celebration of his life, legacy and all of the vast accomplishments and great music he and DJ Premier gave us. “G.U.R.U.” also serves as the lead-single from Marco Polo’s forthcoming LP, PA2: The Director’s Cut, which will be released in July 2013 on SoulSpazm Records.

“Tomorrow marks the three-year anniversary of the passing of the legendary G.U.R.U. of Gang Starr. I decided to this leak this record one day early to ensure DJ’s and everyone can have it ready for his anniversary and it can be played tomorrow. This is one of the most important records I’ve ever been a part of” states Marco Polo. “Thank you to Talib Kweli and DJ Premier for being a part of this incredible record! We will also be premiering the “G.U.R.U.” video very soon (which is directed by Todd Angkasuwan) so stay tuned. Please help share this record and celebrate the life of an artist who influenced myself and so many others in Hip-Hop and music period! R.I.P. Keith Edward Elam aka G.U.R.U. (Gifted Unlimited Rhymes Universal)!”