Passion is the French producer Jean-Baptiste de Laubier’s 14th release. He has been long at work on many things, first becoming famous for his association with the French rap group TTC, and over time becoming a sort of electronic audio-visual Jacque-of-all-trades. He has produced and directed short films, and produced rap and electronic music. This album is all over the place. It ranges from poppy to beautiful and artistic to unlistenable and back again. Where to start on something like that? The beginning.

The opening track sets the scene. It is “Ice Cold,” almost white (like ice) noise, it is numbing, and purposefully so, I imagine, because the second track is meant to awaken the listener.

Wake Me Up: these electronic albums often tell or attempt to tell a story, and this one is no different. The second track is the beginning, perhaps, of a day. There is something fun about the somewhat musically (though not tonally) incoherent soundstream emanating from Para One’s invisible turntables. I say it is musically incoherent because all kinds of sounds come from all kinds of places, at the wrap-up, it changes to discernibly drum-driven, to lead into the third track, “Every Little Thing,” which blends fantastically with “wake me up.” I had to double-check to see if the track had changed. It’s a love song! It is featuring two vocalists, Irfane and Teki Latex, who sound fantastic. The tempo changes kept me guessing, but the chorus kept me grounded. It was, overall, an awesome song. Expect to hear this one.

A cool and blurrily straightforward name for a track: “Vibrations followed by poisoned apples.” This is a fun interlude. We wouldn’t want you to get too comfortable with para one’s sound, so let’s hearken back a couple of tracks to that noise. Oh wait, just kidding it’s a pretty cool song. It also has a healthy dose sound variance, where one second we might be spurred to cheer for more cowbell, because we are drowning in stadium-sound synth, but then it drops off and oh yes, the cowbell. Para one promised poisoned apples, which apparently sound like rain, some jazzy low-key hip hop, more rain, and then it gets a little crazy.

Jaw makes a soulful appearance on the fifth track, which is titled “When The Night” I kept waiting for the bass drop. The song feels like one huge buildup, intermittent samples, house-inspired background, with no bass drop, just a melting-record end.

Sigmund: starts with a sample that might as well say “hey, this song is going to be as surreal as the cover art on our album” (see below), and it is. It might have been made for a robot dance-off. If we could get Bowie wearing a suit of chrome, he would be the judge.

“You” on the other hand, I could do without. It is shopping music (think Gap in San Francisco) on mushrooms. Kind of fun, but nothing that makes it stand out, other than the garbled vocals.

This album is a forward-thinking shoutout to the beginnings of hip-hop that inspired the artist, and retains a tremulous connection to those roots while straddling the line between coherent musicality and completely unrestrained compulsive music-making. 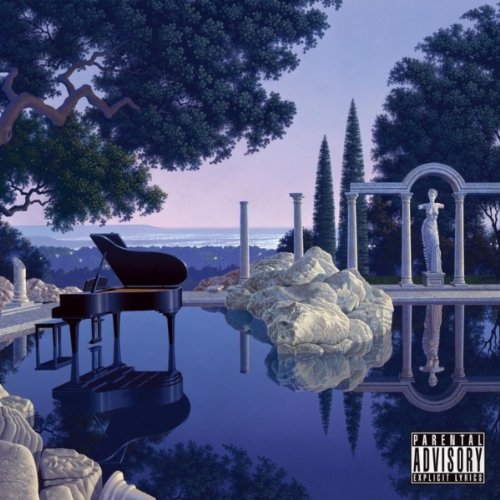