“Monumental” seems like a fitting title for an album by the likes of Pete Rock – a man who has oft been labeled one of the best hip-hop producers of all time. The legendary producer teams up with Brooklyn rap duo Smif-n-Wessun on Monumental to deliver a funky, beat-centric record that, with its boom bap quality and diversity in sound, hails back to the Golden Age of the hip-hop genre. Old-school die-hards like my 40-something friend who still devoutly bumps Public Enemy will no-doubt appreciate Monumental’s musical vibe.

Monumental sees Rock almost solely focus on production, with “Monumental” and “Night Time” being the only tracks on which we hear him rap. Able to let Smif-n-Wessun command the majority of the album’s lyricism, Rock lays down Monumental’s framework with a motley compilation of beats and styles. You’ll find bass-heavy, nod-your-head kinds of tracks, like “Roses,” which features Philadephia rapper Freeway; you’ll discover happier, self-celebrating joints like “Top of the World,” on which the boys are joined by Memphis Bleek; you’ll even hear a reggae beat on the song “This One,” which features Top Dog and Jahdan Blakkamoore.

Having trouble with all of those collaborations? This is where Monumental falters. It’s difficult to keep track of who’s who on the long cast of characters. The album in and of itself starts out as a collaboration, and seems to simply continue picking rappers up along the way without any real destination. In fact — in both sound and theory– “Feel Me” featuring Rock of Heltah Skeltah and Bun B and “Do It” featuring Hurricane G don’t even sound like they belong on the same record.

While Monumental doesn’t nullify any predisposed notions on Pete Rock’s musical genius, its intelligent production isn’t validated by an equally inventive or unique rapping style. Lacking in a cohesive theme, Monumental’s lyricism and verse spitting fall flat. Though Smif-n-Wessun have past proven they’re undoubtedly capable of rap awesomeness (see album: Dah Shinin’– 1995), their signature understated persona gets lost among Rock’s slick beats. And because Monumental hosts so many guests, the rest of the single-track players get buried under the confusion.

All that being said, Monumental is a record to listen to. It isn’t going to piss anyone off, it’s not trying to make history. And with Pete Rock behind the sound, its appeal unquestionably crosses genre boundaries. But if Monumental does indeed rise to become what its title insinuates, its success will speak volumes more to its production than to its lyricism and verse. 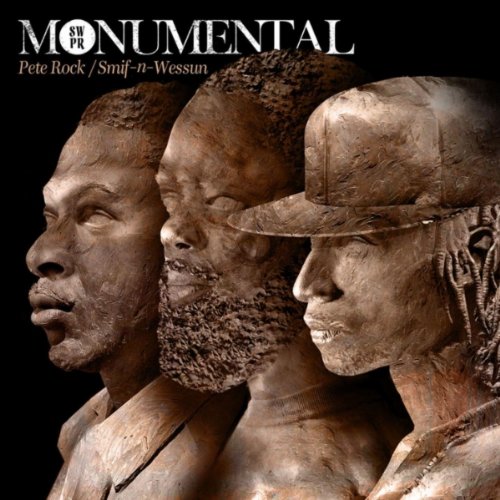