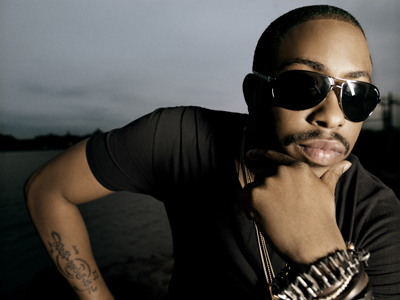 Raheem DeVaughn is no stranger to the music industry. From his debut with, The Love Experience, to his brand new album, The Love & War Masterpeace, he has continued to contribute timeless music and remain relevant.

His message is simple: Love, empowerment, encouragement and strength. Raheem has used his music to instill all of this in everyone that takes the time to listen. His collection of music is filled with a conscious vibe.

The Love & War Masterpeace is definitely a masterpiece. He’s brought light to some of the greatest social and political issues facing our world today. Whether it’s his view on war in, “Nobody Wins A War,” or his view on various world issues in “Bulletproof,” Raheem has found a clever way to speak on it.

With a line up of artists including, Ludacris, Jill Scott, Chrisette Michele, Anthony Hamilton and philosopher, Cornel West, he’s combined different genres of music to tell his story of Love, War and Peace.

What some may say is missing from new music Raheem has found it. He’s made “feel good” music. Following in the footsteps of some of his influences, Marvin Gaye and Barry White, Raheem delivers beautifully. The Love & War Masterpeace debuted at number nine on the Billboard 200, selling over 90,000 copies. Now in the fifth week of his album release, he spoke with MVRemix briefly about its reception.

MVRemix: You’ve done a lot of interviews before your album, The Love & War Masterpeace was released, now that’s it’s been out for over a month, how do you feel about its reception?


Raheem DeVaughn: I think it’s great. I think that I could still extend a lot of people to the music; but overall, the feedback has been great. Being in the fifth week and all, you never know how people will take or the music and the album circulating and everything, but it’s going very well.

MVRemix: You’ve received some international success as well, like with the video “I don’t care.”


Raheem DeVaughn: Yea, it’s picking up. In the UK, it seems to be doing very well. That’s growth for me, I haven’t really had a record over there to really pop, but I’m hearing that they’re really into that record over there.

MVRemix: How would you describe your growth from your first album to this album?

Raheem DeVaughn: First of all, this is my third album in five years. What’s unique about this album is definitely the demo CD factor, it’s hard for people to sell music and I think that was definitely a risk worth taking. i think this album shows my growth as a vocalist [and] my growth as a songwriter. It also shows my depth as a writer. You know, just to not have a bunch of shallow songs that aren’t talking about anything in particular.

MVRemix: You mentioned you’re a singer and a songwriter; you’re also an actor. What do you enjoy doing the most?

Raheem DeVaughn: Hmm man, I think it kind of all intertwines, you know what I mean? Being an artist, you gotta know how to turn it on and turn it off. I don’t know what I enjoy doing more. I think ultimately like performing, being able to perform a record, especially when you know you got a hit record in your hands. Definitely to connect with your audience and perform; I think that’s the best part of it for me

MVRemix: On this album, you have a good mixture of artist, from hip-hop, R&B, soul. Why was that important for you to do?

Raheem DeVaughn: I feel like it matters putting out albums now. It’s like the extra tentions have been set so high. People expect you to put out an album and I haven’t had one in one or two years

MVRemix: Watching you in interviews and listening to you music, I’m always impressed by your positivity. Where does that attitude come from?

Raheem DeVaughn: I think that’s just how I look at life. I just try to have a positive outfit and try give off that energy, throughout the people that’s connecting with my music. You have to be able to define the type of artist you are. If you don’t, then people will assume you are this type of artist that you may not be.

MVRemix: Do you feel any pressure at all as a black man in the industry? I know you have a song with Wale on your album and he was recently criticized for not having enough dark skinned women in his video, is there any pressure on you to please your audience?

Raheem DeVaughn: I mean, you got different types of artists. I can’t really speak for Wale, I can only speak for myself; but some artists are not as hands on with their situation as I may be. You have several artists who don’t care about their image is, they don’t care about none of that. I’m pretty hands-on with what goes on, with that in particular [selection of females], the “I don’t care” video, I was very adamant having chocolate. I feel like all the women are beautiful. We try to spread it out; spread the love. I mean, I don’t feel like every video should have a dark skinned girl or every video should have a light skinned woman, I feel like variety is important.

MVRemix: If you had to choose just one song off the new album, to listen to for the rest of your life, what would it be?

Raheem DeVaughn: [laughs] Awe man. That’s crazy, that’s kind of hard. Of course the Dr. West interlude, awe man, I would definitely have to choose Bulletproof, and then Garden of Love, maybe.

MVRemix: What’s most important message you hope someone gets from your album?

Raheem DeVaughn: The message is this: as artists and producers, you have to define 2010, you know, with the climate the way it is, the earthquakes, volcanoes, you know everything. Having to tackle unemployment. Music is going to a place where we want it to go, it’s going to become more real and more blunt. As artists you have to define what your message is going to be and mine is definitely a message of love, empowerment and encouragement, you know, and strength. All I wanna do is really just like help more people rise to a higher level of consciousness.

MVRemix: You mentioned Bob Marley as one of your mentors, what have you taken from him and incorporated into your own music?

Raheem DeVaughn: One thing from Bob, a lot of people don’t know the history of Bob Marley. Bob Marley started out as a top 40 artists, which means he sells top 40 songs. Then he started a transition and he became more socially conscious by the end of his career. What I got from that is that conscious music, it never gets old.

MVRemix: What inspires you to pick up a pen and pad and start writing?

Raheem DeVaughn: I don’t sit down and write the songs. My process is that, I guess you could say, that I’m a freestyle writer. I’ve been like that for at least ten years. I don’t really sit down with a pen or a pad. I go to the studio, if it’s a beat that I like I just need to go in and spit it real quick, and I have a recorder that I use. Pretty much, couple hours later we have some songs. On a good day, I may do two, three songs a day.

MVRemix: What can we expect from you next?

Raheem DeVaughn: Well I’m shooting the “Hopeless Romantic” April 25, that video is going to be animated. Also coming soon is my video for “Bedroom.” I actually want to shoot a video for every single song on the album.