Kendrick Lamar is an impeccable lyricist. His flow seems natural, at times striking with a rapid, staccato delivery. Other times, he slows it down, allowing his rhymes to be malleable, and shape themselves into whatever form they see fit. Lamar, along with Odd Future, Pac Div and many others, have put California back on the map for hip hop, delivering a new, refined approach, and implementing some of the lyrical themes common in rap with a fresh, and innovative perspective. Lamar’s latest album, Section.80 is a testament to that statement.

From the very beginning, what stands out and contributes so much to Section.80’s delivery, is its production. Some parts are minimalist; spacey, Kid Cudi-esque chords float over snares and layered vocals, allowing Lamar to deliver bar, after bar, after bar. “Hol’ Up” showcases the perfect matrimony between great production, and great rhymes. Soulful horns provide the melody, while Lamar delivers in a fashion similar to Camp Lo, creating a story through his effortless flow.

“A.D.H.D.” has an old-school, G-funk vibe to it; reverberated synths provide a surreal atmosphere for Lamar’s “high tolerance.” “Poe Man’s Dream” is Lamar’s biographical track; from talking about family problems, to wanting to help out friends, Lamar creates an evocative narrative, and contributions from rapper GLC, makes it even better.

“Chapter Ten” sounds like something out of a Sa-Ra album; distorted, fuzzy vocals, and a non-stop, onslaught delivery from Lamar, will make you wish this track was more than just one minute and 15 seconds long. “Keisha’s Song” describes the life of a girl with an unfortunate situation. Ashtro Bot’s contributions to the track will not go unpraised; something of a modern-day Frank Sinatra, but with a lot more rasp, Bot’s vocals in the chorus are absolutely infectious.

“Kush and Corinthians” is such a great track; groovy jazz sounds grow and fade out, with different instruments becoming a part of Lamar’s incomplete puzzle, as he reflects on life, and its many mysteries. The soulful vocals from BJ the Mystery Kid are a nice addition too. “Blow My High” is such an out there song, but in a good way. Weird, spacey sounds sporadically appear behind funked-out synths, while Lamar humorously rhymes over it.

“Ab-Souls Outro” stands out with its fast-paced, bebop production, and Lamar’s accurate and precise delivery. Ab-Soul brings an aggressive approach similar to P.O.S. in his rhymes; each one is passionate and heartfelt, hitting you where it counts. Similar to the improvisational keyboards and saxophones in the song, Ab-Soul and Lamar deliver in the same way, some of their rhymes seeming organic and instantaneous, like that of a John Coltrane, or Miles Davis solo.

“HiiiiPoWeR” ends out the album with its enjoyable J. Cole production, and Lamar’s insightful lyrical content.

This album is amazing; it presents itself as something more than just a piece of recorded music. It provides a message, with that message being, “stand for something.” Maybe this is due to Lamar’s upbringing in a world filled with violence and hardship, making a way for himself regardless of his experiences. Where ever the message derives from, it is obviously significant, and allows the album to have something of a concept behind it. The production is flawless; it takes chances, allowing moments to experiment and branch out, resulting in a positive outcome. Section.80 is welcoming and enjoyable, and if you have not heard of Kendrick Lamar, then this would definitely be a great place to start. 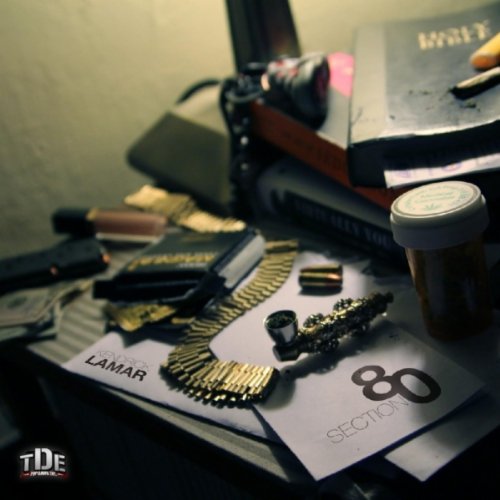