Last year Skrillex’s OWSLA team made their initial foray into the live sphere during Miami Music Week, the monumental celebration of Electronic Dance Music centered around the Ultra Festival in Miami. With that festival’s addition of another entire weekend of official music and after parties, OWSLA has stepped it up accordingly, announcing four unique events
and a curated stage within Ultra itself.

OWSLA prides itself on the communal aspect of live events and these off-site functions will serve as both a showcase of up-and-comers as well as established talent from within their stable of artists and even friends from across the globe. This ethos is most evident in the standout billing for the “group-hug” style pool party at the Raleigh Hotel, where multiple artists representing some of the most bubbling labels in contemporary electronic music, including WeDidIt, Body High, Mad Decent, Fool’s Gold, Boysnoize Records, Smog, and Bromance will take the stage for collaborative sets and general good vibes- attendees can expect improvised back-to-back sets from some of the biggest names in dance music. More special showcases will also take place on a yacht trolling the bay front as well as some of South Beach’s premier night spots, like Story Night Club. 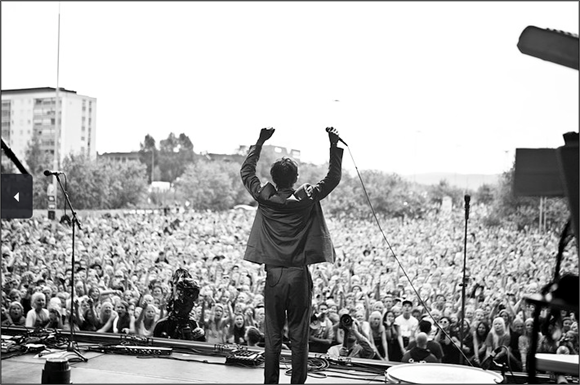 In about a month from now the largest festival in Sweden, Peace & Love, will open gates on their 14th year of bringing worldwide attention to the small worker town of Borlänge in the heart of the country. With 50 000 festival goers 2011 Peace & Love is confident of another record year, never straying from their grass root concept of combining world class music with a lineup of influential speakers to raise awareness and to bring a positive change to the world.

This years line-up headlined by Rihanna sees a growing amount of North American acts, including Regina Spektor, Skrillex, Basia Bulat, My Morning Jacket, M. Ward, The Pains Of Being Pure at Heart, heavier acts Clutch, Hatebreed and of course a substantial amount of local artists with international success such as Niki & The Dove, Icona Pop, The Soundtrack of Our Lives, Caviare Days, and many more…

Peace & Love have since the very first year in
1999 kept true to the founding mission, to manifest against violence and racism. The main message to festival-goers is to “use your heart and your brain, not just your ears”.

With 2012 edition of speakers to be announced, Peace & Love have for many years brought influential speakers to the festival, with last years speech by Jesse Jackson after a Bob Geldof performance as a prime example, and Malcolm McLaren being another noteworthy speaker at the festival.

Peace & Love who doesn’t describe themselves primarily as a festival, but as an “inspirer of good ideas from the heart of music”, connected through a visit by popular Cuban artist X-Alfonso with the background and the spirit of cultural workers on Cuba. They decided to start a Peace & Love branch in Havana, which saw it’s first festival take place in 2010.

Different conditions of life, different music, different audiences and different languages ??was by many seen as obstacles, but Peace & Love saw it as an immense source of mutual learning and inspiration.

With X-Alfonso – also a UNICEF ambassador and curator of Cuban youth music activities – as the artistic director, the festival have now been held three years in the center of Havana, with very low ticket costs so the public can afford to visit the arrangement (20 Cuban pesos, about 1$). Revenues go to supporting cultural projects in Havana and the survival of the festival. Peace & Love Havana 2011 had 17 000 visitors and hosted artists such as Swedish Looptroop Rockers, Familjen and Cuba’s most famous singer/songwriter Carlos Valera. Peace & Love Havana 2012 took place 9-10 March, grew to 25 000 visitors and moved location to the famous ‘El Morro’ fort at the port of Havana. The line-up included Swedish artists Promoe, Timbuktu and again Carlos Valera and naturally X-Alfonso.

THE WORLD OF PEACE & LOVE

Welcome to the world of Peace & Love – a world filled with love, music, friendship, follies, understanding, diversity and inspiration.

Three friends in Borlänge who had enough of crime, drugs and violence in their environment decided to draw attention to the good of the city while doing something to contribute to a better world. In the summer of 1999 they asked a number of bands to perform for free and to play for a very small audience. The revenues were donated to charity. Peace & Love was born.

Over the years the festival grew slowly, without ever losing touch with its roots or its founding mission. Peace & Love 2011 had 50 000 visitors, 8000 workers and around 650 journalists covered the festival.

Every year Peace & Love gather around a new theme linked to the general message of the festival. 2012 artist line-up is booked by the theme “A New World”.

Around 220 artists and speakers are booked for Peace & Love every year. Some of who have previously participated in the festival are Bob Dylan, Jay-Z, Patti Smith, The Strokes, M.I.A., Deadmau5, Jesse Jackson, Hanoi Rocks, Iggy & The Stooges, Bob Geldof, John Fogerty, Manu Chao, Volbeat and Robyn.

An important part of the festival is the program called Peace & Love Forum. This is the general name of the Peace & Love meeting place for inspiration, discussions, conversations, feelings and messages. Here is where the invited personalities hold speeches, gets asked questions and creates dialogues.

The program includes besides music also art, theater, stand-up comedy, dance and performance art. There is also a private festival for children – the Children’s Peace & Love – that go on for 3 days.

In line with his ongoing attempts to re-imagine the idea of touring and performance, ubiquitous Grammy-winning DJ/producer Skrillex announces a string of Canadian dates featuring some of the most bubbling names in Electronic Dance Music, all of whom will be traveling between cities on a private passenger train. At each stop, a festival event will take place, featuring performances by Skrillex, Pretty Lights, Diplo, Grimes, KOAN Sound and Tokimonsta on multiple stages to crowds in the tens of thousands.

The Full Flex Express concept is inspired by The Festival Express tour that took place along a similar route in 1970 featuring Janis Joplin, The Grateful Dead, and The Band. An assertion of the camaraderie and like-mindedness of the performers, this tour is less about practicality than it is simply enjoying the ride. When asked about the run of dates, Skrillex said “we were really inspired when Mumford and Sons and Edward Sharp and those guys did a train tour. We wanted to do it as well and share this music with people across Canada. Just to do it and have fun”.

Audiences will undoubtedly share in the exclusive revelry, much as concert-goers in New York and Los Angeles did earlier this year when Skrillex ambitiously played a series of “takeover” club dates in diminutive venues on both coasts.