Southern rap heavyweights Gucci Mane and Waka Flocka Flame are known for bringing hyped-up, crunk-laced hip hop to the masses, and although Ferrari Boyz is not their best delivery, it still, barely I must add, gets the job done.

Between the artists constantly yelling their names and what they represent, are rhymes centered around money, cars and cocaine. There is no witty or crafty wordplay present; any word that can be rhymed with the other seems to be the procedure for just about every track on this album.

Most times, Mane is the Robin to Waka’s Batman, especially on the track “Suicide Homicide.” Rapid-fire rhymes supported by chants of “squad” and “Waka,” leave Mane’s verse in the dust.

Contributions from Brick Squad label mates Wooh da Kid, Frenchie, YG Hootie and others are apparent, but do not enhance the songs they perform on in any way. The production is also nothing impressive; filled with imitated high-hat-and-bass sounds that desire to be like the prime cut beats of Lex Luger, these hand-me-down beats from Drumma Boy, Fatboi and other contributors, gets the job done, but doesn’t really leave any resonance with the listener.

This album is adequate; if you’re looking for something significant or worthwhile, just pop in something from either artist’s back catalog. After one listen, you may either feel satisfied or completely distraught with how the album just coasts by, leaving a not as pleasing feeling unlike those felt when listening to Waka’s boisterous 2010 solo album, or Gucci’s well-received 2009 solo album.

If you like being bombarded with constant reminders of the artist you’re listening to, production that imitates rather than originates and rhymes that are lackluster and stale, this may be the album for you. Ferrari Boyz zooms right through, leaving no traces of innovation, and a road full of skid marks. 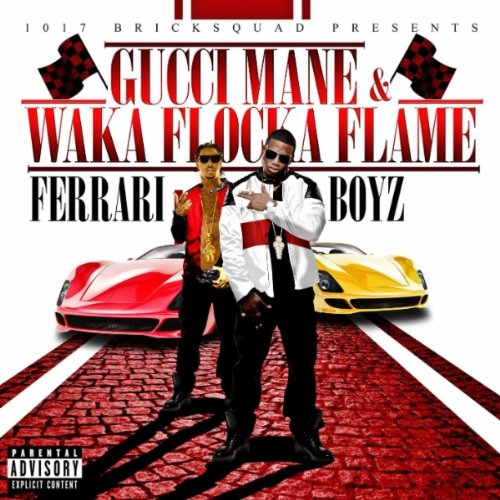