The Decibel International Festival announces the lineup for their 9th annual festival in Seattle, Washington, September 26 – 30, 2012

In addition to the headlining acts above, the festival will feature such heavy-hitters as Dragonette, Emancipator, and Yppah. Click here for the first 60 musical acts announced.

Following the “artist a day” approach, the rest of the musical lineup (60 more acts out of 120) will be announced on June 27 with the entire program of educational programs, film festival, after-parties and boat-parties announced on July 11th. To reward attendees who purchase passes early, tickets will be discounted by 25% through June 26th.

Please visit The Decibel Festival website for more information and to purchase tickets. See attached flyer and link to the 2012 preview video.

In year nine, The Decibel International Festival of Electronic Music Performance, Visual Art and New Media is quickly becoming the SXSW of the swelling cultural phenomena that is electronic music. The Seattle based festival expects to hit 30k attendees this year with over 170 artists from 19 different countries, plus 72 educational speakers, making Decibel Festival an oracle for the growth of the entire international electronic music scene. The entire festival takes place over a five day period at over 14 venues in Seattle, Washington.

NOTE FROM THE DECIBEL FESTIVAL CURATOR AND CREATIVE DIRECTOR
In 2003, I founded Decibel Festival with the mission to redefine underground electronic music and visual art as a unified performance medium, while establishing the Pacific Northwest as a vital hub for electronic music culture in the United States. At the time, “laptop performance” was still shrouded in mystery and most electronic music performance consisted of turntables, CDJs, and a mixer. Electronic music in America had receded from the rave boom back to small communities of loyalists caring more about the music itself than its potential to generate revenue or fan base. This has been the community that has supported Decibel from day one and I’m thrilled they are still at the heart of Decibel today.

Fast forward to 10 years and electronic music is pervasive in nearly every facet of mainstream American culture and we continue to have mixed emotions regarding this surge. As avid supporters, performers, producers, and fans of electronic music for over 20 years, we can’t help but feel nostalgic for a time when underground warehouse parties and independent record stores were the predominant outlet for electronic music discovery.

As much as the digital age has brought many advantages, it’s important to remember how we got here and what it means. It’s a balance between technology and creativity; innovation and nostalgia; popularity and obscurity. With each year I hope to build a program that encompasses all of these elements while retaining the integrity of a festival known for pushing the boundaries of both art and science.

Looking at our continued growth from our inaugural festival of 2,500 attendees in 2004 to 23,000+ attendees in 2011, I am faced with the challenge of assembling a compelling program that captures our past, present, and future. Although we’re only mid-way through announcing this year’s line-up, I believe that 2012 will be our most ambitious program. Based on the initial list of artists below we already have our most diverse program to date. This includes a strong international presence with 19 countries represented as well as 25% of the line-up featuring female artists, which is a historically high number based on other electronic music festivals. In addition, Decibel is continuing to embrace a wide spectrum of genres, venues, and activities designed to entertain, educate, and inspire attendees regardless of age or background. 2012 festival pass holders will be treated to 34 audio/visual showcases, an outdoor event, a three-day conference, and a film festival. In addition, Decibel will be co-curating and co-producing eight after-parties and five boat-parties, none of which will conflict with the festival schedule. As you begin to look at what we have in store this year, I encourage you all to dig deep into our new website and explore a festival filled with discovery, decadence, beauty, emotion, and unbridled entertainment start to finish.

Much more to come. Hope to see you in September!
Sean Patrick Horton, -Founder, Curator and Creative Director 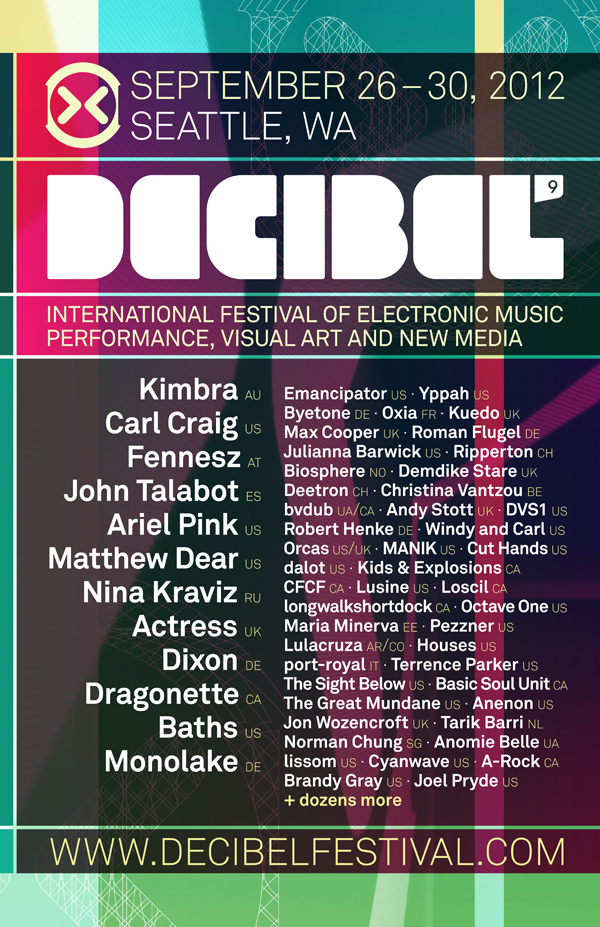 It wouldn’t be a lie to say that for the past two years, the Slightly Stoopid show at Redmond’s Marymoor Park has commanded the spot of number one concert of the year in my book. Formed in 1996, this Long Beach, California reggae-rock-hip-hop fusion band is most notably known for its surfer attitude and stoner style. That’s right – if you’ve got anything whatsoever against the smoking of, consumption, possession, or association with marijuana, Stoopid’s shows are probably not going to be your thing. Case in point: Slightly Stoopid just embarked upon a summer tour entitled “The Seedless Summer Tour”, accompanied by California artists Rebelution and Shwayze. The Seedless Summer Tour made its first stop at Marymoor Park, and I was lucky enough to be there again this year.

Rapper Shwayze opened up for Slightly Stoopid just as the sun was thinking about setting, creating an upbeat background soundtrack for those who had taken to the grass to relax and wait for the main act to begin. Given the general demographic in attendance at a Slightly Stoopid show, I’m not sure I would have made the decision to include a rapper in the lineup – I wouldn’t want to insult anyone, but let’s be honest, those kinds of folks are probably more likely to stick to a comfy blanket on the grass staring up at the sky than rushing the stage and bouncing up and down. Shwayze wasn’t intolerable; he simply belonged somewhere else.

Rebelution, however, proved a worthy addition to The Seedless Summer Tour bill, saturating our ears with serious reggae beats. Rebelution formed in 2004 when four college students in Santa Barbara began playing reggae together at parties in Santa Barabara’s notorious party neighborhood Isla Vista. Rebelution has truly embodied the spirit of West Coast reggae, with its four white boys who sing about surfing, girls, and — for those of you aficionados out there – Cali bud. Rebelution’s set brought back the chill vibe to the show that had been lost during Shwayze’s.

By the time Slightly Stoopid made its way front and center, the light of dusk had settled perfectly to illuminate the massive cloud of smoke that was lingering over the crowd. Slightly Stoopid played for over two hours, and included hits like “Collie Man” and “Closer to the Sun.” Looking out over the park, all that could be seen were blankets filled with laughing friends and a dance floor packed with all kinds of people, calmly swaying and smoking.

Barring the weed and the occasionally profane lyric, The Seedless Summer Tour was much like a family affair.

Kokane & TechN9ne on Tour bus for show in Olympia, Washington