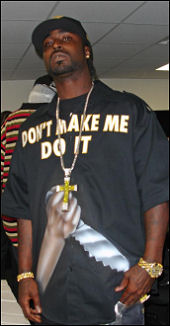 G-Unit is known of the world over, and as soon as Yayo got locked up, the world then heard of Young Buck. G-Unit’s southern frontman has made waves since “Straight Out Of Cashville” came out, late 2003. Being allegedly affiliated with stabbing someone at an award show, and upholding the image he talks about secured Young Buck quite the steady following. Many who criticize G-Unit still seem to respect him.

In November, Buck is set to follow up “Straight Out Of Cashville” with “Buck The World,” followed by launching his own label, Cashville Records. We spoke whilst he was caught in traffic.