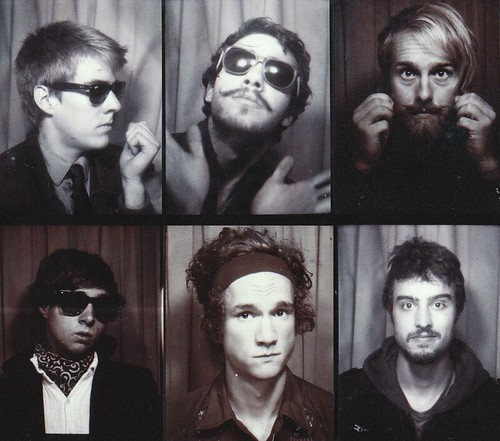 Adventure Galley is a Portland based band that found its origins in Eugene Oregon. They recently released a new single called “Semantics,” which can be found here:

George Schultz is a multi-instrumentalist and songwriter. Back in the day, we did our undergraduate work together at the University of Oregon. I caught up with George over the Internet a few days ago.

MVRemix: What have you boys been up to these days?

George Schultz: Aside from the usual RV parties, house shows, and general debauchery, Adventure Galley has been writing new songs, which we plan on eventually making an EP out of. We’re also getting ready to release that album we recorded all that time ago. It’s been a long time coming, but we’re looking forward to getting that album out there and focusing on touring and writing more.

MVRemix: You just released the new single, “Semantics.” Is this a preview of things to come?

George Schultz: Semantics isn’t necessarily a single, though many folks have been referring to it that way. Our intention with that release was to show another side to our music. Most people are familiar with our tracks Addict and Weekend Lovers, which are very in-your-face indie pop songs. Semantics is more laid back and experimental in sound. We wanted to show the folks at home that side of our sound. We enjoy non-standard chord formations and general weirdness in our music and you get a taste of that with Semantics.

MVRemix: I heard you guys were operating out of an old church, is that true? If so, how did that come about? How do you like the space?

George Schultz: For the first time in a couple years the band is all living in the same city. Since February half of us have taken up residence in a 19th century church in SE Portland, OR lovingly referred to as the Funky Church. We filmed our first music video (for Weekend Lovers, which you can see here) at the Funky Church last March and after meeting the residents we slowly started taking over rooms as they opened up. It’s a beautiful space and we have set up a home studio where we are able to demo new music and work out of. Every once in a while I wake up in the morning and get a very surreal feeling like “wow, I live in a church, this is strange, but I like it”.

MVRemix: Is there an Adventure Galley tour on the horizon?

George Schultz: We’ll be doing a bit of touring this summer and fall. We’ll travel around the west coast and hit up the usual spots. More on that later!

MVRemix: From what I understand, there are multiple songwriters in the band. Is Adventure Galley a democracy? How do you guys choose what songs to play?

George Schultz: The dynamic in our band seems to be fairly different from most of what I’ve seen of how other bands function. Whereas most groups have a primary singer-songwriter, we all contribute to songwriting, but when it comes down to it, David and Aaron are the primary creative directors. They each have very different styles that have amalgamated into the sound that is Adventure Galley. We are democratic but in that effort we end up moving in multiple directions every time we write a song together. It’s not simple, but nothing ever is with this band. We don’t want simplicity, we want innovation and beauty.

MVRemix: You wrote the song “Addict,” which won a Toyota music contest a few years ago. Is there a story behind the song?

George Schultz: Well once upon a time in 2009 we wrote Addict, a charming little four chord pop song that we loaded up with as many hooks as possible. In 2010 we decided to record the Right Place to Be EP, on which Addict is a track. One day I was on the internet and saw the Toyota Rock the Space competition and submitted Addict. It was really a fuck it, why not? kind of moment. I didn’t have the expectation that we would win and I didn’t even tell the rest of the band I submitted it until I got a call saying we had made it to the semifinals. After a few rounds of voting we won the contest, got a record deal with Myspace Records and the rest is history. When Myspace went under they gave us the masters to our album and we now get to own our own music. It gives us creative control, which we like, but it also puts a lot of responsibility in our hands to make it a great album before we release it without any additional financial backing. That seems to be the nature of most music today; unless you have somehow developed a lot of hype, you have to make your own way in the world of music. I have developed a great respect for artists who manage to make it through their hard work and creative initiative as opposed to having a good publicist that pushes them as a commodity. It’s a difficult business to be in, and we were very fortunate when we won that contest because we were given an opportunity that is practically impossible to come by in this industry: a no-strings-attached record contract. As far as the song goes, it’s a lot of fun at shows, it’s a good dance track and it’s undeniably catchy. The lyrics were written by myself, David and Aaron and I can’t really say what they’re about, though the themes seem to tie into psychological chaos and addiction. It’s funny, I’ve been asked about the meaning of the lyrics many times since that song was recorded 3 years ago and my answer always seems to change. A song can mean many different things to someone over the course of the years, it’s a matter of listening to it at the right place at the right time.

George Schultz: I don’t know if your readers are aware that you are a proficient Tuvan throat singer, but my new goal as a songwriter is to write a club-banger of a track featuring your majestic Siberian-style vocals. So they should keep an ear out for that when it happens.