Auckland, New Zealand, City of Sails, home of the Sky Tower, various volcanoes and rugby. Not to mention the band Cut Off Your Hands, which I used to confuse with Clap Your Hands Say Yeah and in turn Does it Offend You, Yeah? Both great indie bands in their own right, though out of the three, Cut Off Your Hands is the most relatable.

Singer Nick Johnston has more than just brooding good looks on his side, he’s got the versatile vocals to match. The soothing side of Robert Smith and the lighter side of Ian McCulloch, with that familiar but never tiring indie kick to it. Cut Off Your Hands are now on their second album, and first since 2008’s You and I. The sophomoric effort from this kiwi quartet, Hollow, is a step down in pace from You and I, though never a step down in quality.

Mixed in Sydney, unlike its London-born predecessor, Hollow is very much the sadder cousin of You and I. The structure is very much the same but the paint is a different color. Grey. It kicks off with “You Should Do Better,” which is not the tale of a desperate admirer but the self-deprecating musings of Johnston as a boyfriend. Perfect for that resurged generation of indie emo. “Hollowed Out” is practically a new Cure song while “Fooling No One” is more their own creation and possibly the most upbeat song on the album.

With a band name like Cut Off Your Hands, a CD called Hollow and song titles like “Buried,” “Down & Out” and “Nausea,” it may be preferable though not required to be in a certain mood when listening to this. Johnston shrugs it off in interviews, calling them “…Slow songs and lazy stuff,” in that cute sarcastic nonchalant foreigner way. He’s truly fooling no one, because we all know that music like this doesn’t come from a sluggish place. This is emotionally-driven rock, with that post-punk sound, for fans of Morrissey, Editors, Echo & The Bunnymen and The Cure. 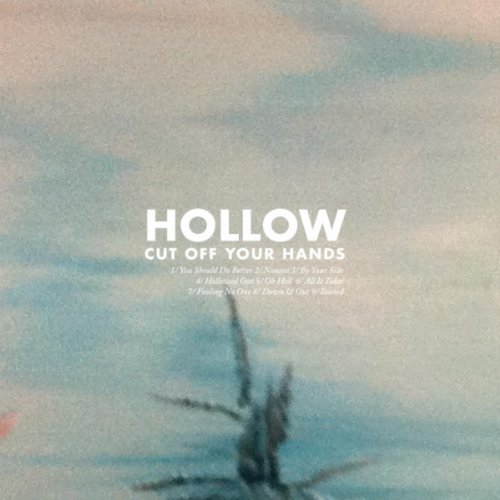